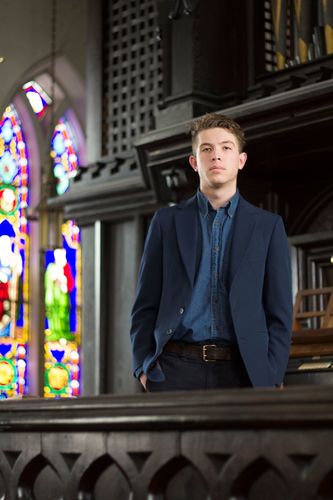 Thomas "Buck" McDaniel joined St. Edward's as Organist & Director of Music in Summer 2020. Previously, he served as Director of Music at Historic St. Andrew’s Church in Cleveland. The oldest historically-Black Episcopal congregation in Ohio, St. Andrew’s is a lively community dedicated to solemn worship traditions and active music ministry. During his tenure, the choir was invited to perform for The Most Rev. Michael B. Curry, Presiding Bishop of the Episcopal Church, in the Opening Eucharist of the 2018 Evangelism Matters Conference. Additionally, he served as Director of Music for the Cleveland Chapter of the Union of Black Episcopalians for four years.

Originally from Columbia, Mississippi, he has performed concerts as organ recitalist, composer, and conductor across the United States including Washington (DC), Boston, Pittsburgh, Detroit, Chicago, Cincinnati, Minneapolis, and Seattle. His work Three Voices was premiered at the 2014 Belfast Pipeworks Festival (Ireland) and subsequently toured throughout the United Kingdom by organist James McVinnie. His arrangement of Nico Muhly’s Bright Mass with Canons, originally composed for the Choir of St. Thomas Church (5th Avenue), was commissioned by the Boston Symphony Orchestra’s Tanglewood Music Festival. He is published through St. Rose Music, and several of his works can be heard on iTunes and Spotify. He is currently completing his studies at Hunter College with a strong emphasis on organ improvisation under Professor David Enlow (Park Avenue Synagogue, Episcopal Church of the Resurrection).